The South Korean duo, which between them make three of the five sets sold in the country, will slash prices by about a fifth, said four industry executives. The full effect of the cuts, in the 43-55 inch screen sizes, will be evident by Diwali, although prices have dropped by 8-12% in the run-up to the cricket World Cup, which starts May 30. Prices could fall Rs 8,000-15,000 by September, they said.

LG has dropped sticker prices by Rs 3,000-7,000 and Samsung is offering retailers Rs 3,000-4,000 of support for each set to clear out old stock. New sets will carry the old sticker price, which isn’t the norm, executives said. Samsung is also offering freebies on new models which can be traded for additional discounts.

A Samsung India spokesperson, however, denied plans to reduce prices. “Continuing with our consumer-focussed approach, especially during the upcoming World Cup, we have introduced newer models in our smart TVs that come with superior features,” the person said.

The head of a leading national retail chain said Samsung has not changed the maximum retail price (MRP) and is instead offering indirect discounts. The development brings to mind a similar battle in the smartphone segment when Chinese brands forced Samsung to drop prices.

Industry executives said Samsung and LG want to narrow the pricing premium over brands such as Xiaomi, TCL, Thomson and BPL to 5-10% by Diwali from as much 50% on some models. That may force Sony to further drop prices after the Japanese company slashed rates 7-8% last month for sub-40 inch sets. However, Sony had told ET last month that it wouldn’t enter into a TV price war. 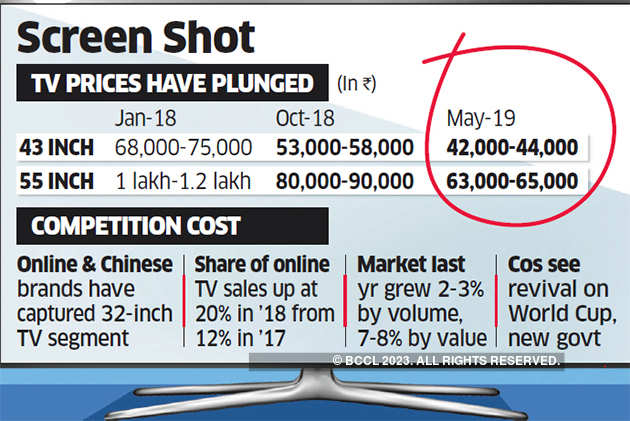 Cheaper brands have hurt Sony, LG and Samsung in the price-sensitive, 32-inch segment, prompting the leaders to build a moat around the market’s premium end.

Pulkit Baid, director of Great Eastern Retail that runs 58 stores, said large brands are now targeting the 43-55 inch segment to compete against Chinese brands with almost similar pricing. “I am certain the sub-55 inch category will see more aggressive pricing in the next three months after the steep price cuts in 43-inches from last year,” Baid said.

An LG India spokesperson said the top-tier brands command more than 75% of the total TV market and there is not much impact on the positioning of these big brands despite the availability of low-priced choices. He said consumers look for pricing, value proposition, better technology and after-sales service while purchasing a product, since the lifecycle of a TV is more than five years. “Not just high end, we have retained and further strengthened our leadership in the 32 (inch) smart TV category,” the spokesperson said.

Nilesh Gupta, director of Vijay Sales, said that while prices are dropping, brand loyalties are unlikely to shift. “It’s unlikely a buyer for LG, Samsung and Sony will shift to any other brand,” Gupta said.

The Rs 22,000-crore Indian TV set market is expanding at 8-10%. Tracker GfK estimates online brands accounted for 20% of total television sales volume in 2018, a channel in which Samsung, LG and Sony are seen as late entrants.

Industry executives, citing GfK numbers, said Samsung is the largest in the overall TV market with around 30-31% share, followed by LG at 27-28%. However, Xiaomi, which cites IDC data, claims it is the largest in India’s smart TV segment.